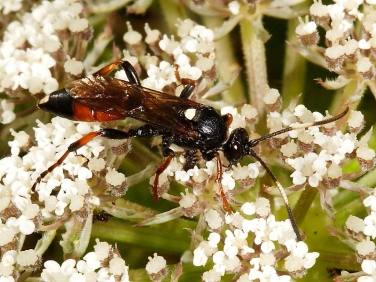 Ichneumon suspiciosus and Ichneumon stramentarius are two parasitic wasp species, part of the huge order of insects known as Hymenoptera, commonly seen in gardens and the countryside throughout the UK.

They are just two of the many thousands, possibly even millions, of parasitic insects found throughout the world that help keep the complex balance of nature on an even keel by preventing any one species becoming too successful.

These two Ichneumon Wasps are both endoparasitoid species, laying their eggs in the caterpillars of butterflies and moths which then hatch and feed internally inside their larval host which eventually dies. It is suggested that over ten percent of all known insects live off other animal species without giving anything back in return. 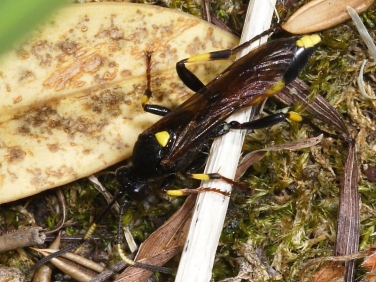 Due to their similarity the identification of many parasitic wasp species is not possible in the field and our knowledge of the impact these species have on other insects is under researched. However, this subject is becoming increasingly topical following concerns that the parasitic fly, Sturmia bella, recently introduced from the continent, is contributing to the dramatic decline in Small Tortoiseshell butterfly numbers.

Left to nature a normal population balance would be expected to occur between host and parasite but, of course, we can’t always be certain that we are not unknowingly tilting the odds against a natural equilibrium by something we, ourselves, are doing to the environment.