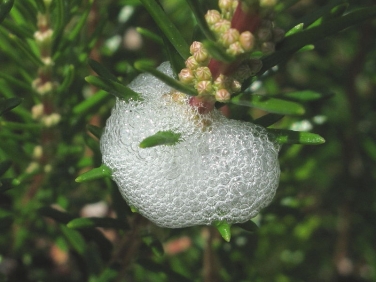 The frothy bubbles, often referred to as Cuckoo Spit, that are commonly seen on a wide variety of plants in the summer are made by the nymphs of Froghoppers which are members of the large Hemiptera order of insects, also known as True Bugs.

Within this large group of insects is a small sub group, known as Cercopidae, containing the ten different species of British froghoppers, the commonest of which is the Common Froghopper, also often referred to as the Spittle-bug.

The Common Froghopper is named for its jumping ability and because of its supposed facial resemblance to a frog. 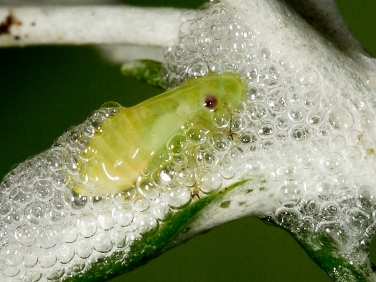 As green nymphs they suck the sap from plant stems and create a mass of bubbles as a defence against predators, a buffer against oscillating temperatures and to prevent dehydration.

The life-cycle of these insects has three stages: egg, nymph and adult. It does not have the pupal stage in which many other insects such as butterflies, dragonflies and moths complete their metamorphosis.

Before the adults die in the autumn they lay up to 100 eggs on the plants which then overwinter before hatching in the spring. The nymphs create the froth from sap and remain hidden beneath the bubbles, moulting on several occasions, until they are fully developed. 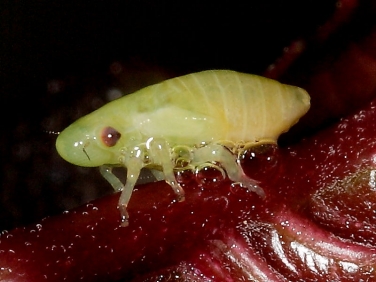 During this juvenile stage they can best be seen by blowing gently on the bubbles to expose their green bodies.

The adult Froghoppers are also vegetarian and feed on sap from plants but being more agile do not reguire the protective shelter of the bubbles.

In the past many myths have centred around these bubbles and in the British Isles they are often still referred to as Cuckoo Spit as it was once thought they were made by Cuckoos. Whilst in the United States, where the insect is also very common, the froth may also be referred to as Snake-spit, Frog-spit and toad-spit. 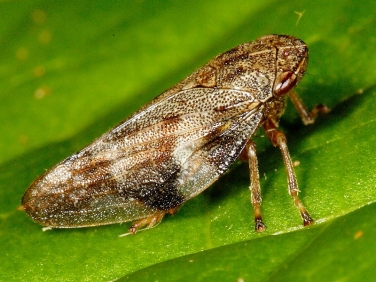 Wildlifeinsight Identification guide to Common Froghopper (Philaenus spumarius): The adult Common Froghopper is between 5-7mm long and can be seen throughout the UK between June and September. Some species within this family of insects can be difficult to identify but, although the colour and pattern of the Common Froghopper can vary greatly, with some specimens appearing almost black, they can be identified from most other Froghoppers by the deeply curved leading edge to the forewing.

They can be found almost anywhere throughout the British Isles, in any habitat where there is some form of vegetation and are commonly found in gardens.