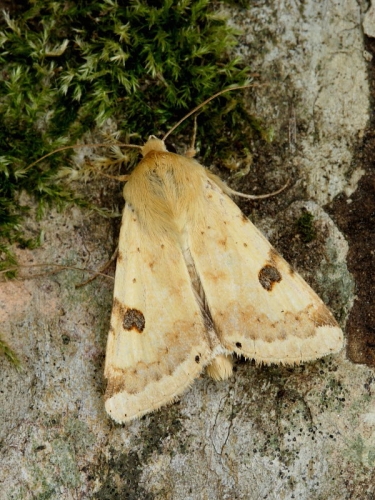 This migrant moth was unusually seen during the daytime whilst photographing Ermine nests on the cliffs over looking Poldhu Cove on The Lizard before the storms moved in last week.

Numbers of migrant Painted Lady and Red Admiral butterflies were also feeding on Sea Thrift at the time so there must have been some insect migration over the previous twenty four hours.

It’s not unusual to record this moth at this time of year in Cornwall. They are rarely numerous and normally attracted to light at night. Like many migrant moths they can vary in shading and the very pale ones are thought to have developed in a much warmer climate perhaps as far south as the Sahara.

Insight into Bordered Straw (Heliothis peltigera): with a wingspan of approximately 38mm it is an annual migrant to the southern half of the UK but has been recorded as far north as Shetland. The caterpillars feed on a variety of herbaceous plants.