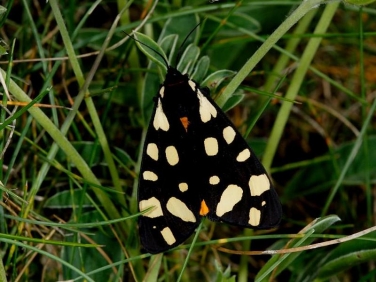 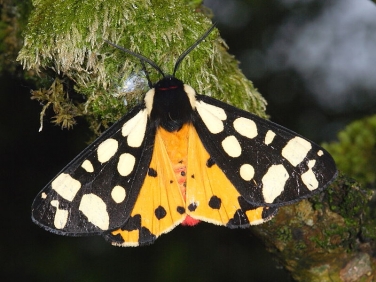 Cream-spot Tiger is the tiger moth species most frequently seen by walkers on the South West Coast Path of Cornwall between May and June.

Our first of the year was at Poldhu Cove on the Lizard a couple of weeks ago. It landed on the bank of a cliffside road as we were photographing Ermine Moth webs.

This species always seems at the mercy of the winds, often being blown sideways, as it flaps a short distance before dropping haphazardly back into the grass. When still on the ground, with wings closed, its bold yellow and black hindwings and red body are covered up and only revealed in flight or when disturbed. To a predator this sudden flash of colour is thought to be a warning that it is unpalatable.

Insight into Cream-spot Tiger (Arctia villica): with a wing span of between 45-60mm it inhabits ungrazed grassland in the southern half of the UK. It is often disturbed during the day but also flies at night and is attracted to light.

The caterpillars are hairy with brown heads and feed on a range of herbaceous plants.