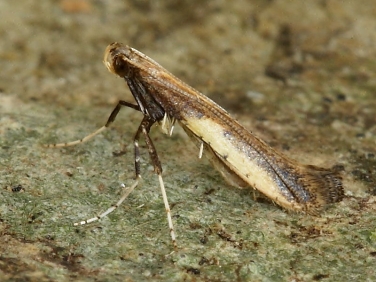 One of the most common leaf miners in our garden is the Azalea Leaf Miner which isn’t surprising as we live in the far south west of Cornwall where many nearby public gardens hold some of the countries finest collections of Azaleas and Rhododendrons.

It is not a natural British moth species and was probably introduced into this country on plants brought into these collections from abroad. It is a member of the Caloptilia sub family of micro moths which are recognised by their elongated front legs which cause them to sit with their bodies more upright than other species.

Insight into Azalea Leaf Miner (Caloptilia azaleella): an adventive species that is now fairly common in parts of southern England and spreading its range northwards. The adults have a wingspan of about 10mm and flies in several generations between May and October.

The larvae mine the leaves of azalea and rhododendrons leaving brown discoloured blotches and rolled up leaf tips.