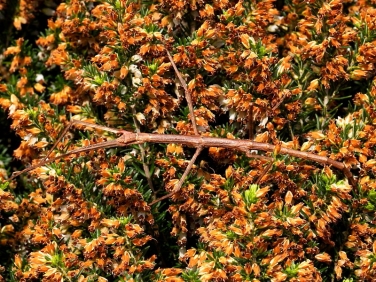 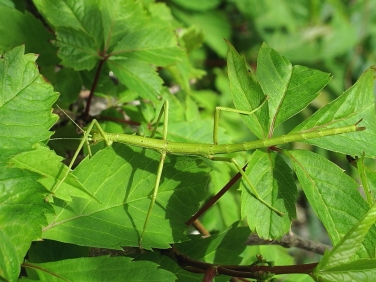 The tiny Unarmed Stick-insect nymphs hadn’t been seen in the garden since the end of March. April’s heavy rain no doubt was partly responsible as they only seem to emerge from the depths of shrubs and hedges to bask in the sun.

When we came across two almost fully grown specimens a couple of weeks ago, one green and a large brown form of almost 120mm, it was reassuring to know that despite the wet weather they were continuing to flourish.

These insects are the Unarmed Stick-insect that, having been introduced into parts of the south west on imported plants, have become naturalised.

So, although these amazing creatures may not be native to this part of the world, they are certainly the longest, if not the heaviest, insect likely to be encountered in the British Isles.