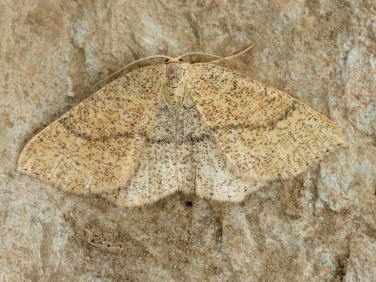 Jersey Mocha may be a very rare British moth but one of the joys of moth trapping is that you never know what will turn up. Please see updated life cycle information and sightings page for Jersey Mocha

This Jersey Mocha is admittedly not going to win any awards for beauty but it still came as a welcome surprise as it isn’t every day that you record a macro species that you haven’t seen before.

This species was first recorded in mainland Britain in 2003 at Portland Bill and subsequently a small breeding population has been found on the south west coast of Cornwall, a few miles from my recording site.

Maybe, with further recording effort the Jersey Mocha may be found to have a more extensive range than previously thought.

Please see updated life cycle information and sightings page for Jersey Mocha: a member of the large Geometridae family of moths it has a wing span of approximately 30mm. The intensity of its markings is variable but it generally has a wash of light freckling.

It derives its English name from its discovery in the Channel Islands. The larvae feed on the leaves of Oak trees and the adult flies in two generations between May and June and then later in August and September.