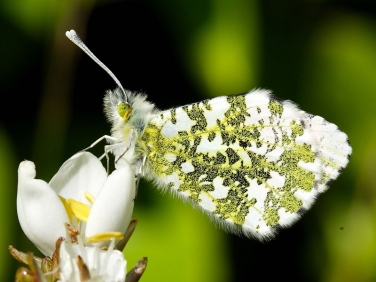 This is the appropriately named Orange-tip butterfly which is on the wing at the moment. It’s only the male Orange-tip that has orange tips to its forewings and the plainer female can easily be mistaken for either a Small White or Green-veined White butterfly.

However, if the underside of the wings are visible then there is no mistaking the female Orange-tip as she has a subtle green and white marbling on the hindwing that other white butterflies don’t have. See latest Orange-tip species page.

This male, photographed in our garden last week, settled with its wings closed and would have easily been overlooked had it not been seen flying. Only when a bee tried to land on the same flower did it flash the orange tips as a warning that it is unpalatable.

Insight into Orange-tip (Anthocharis cardamines): commonly seen throughout much of the UK between April and June with an occasional small second generation in late August/September, it can be found in a wide variety of habitats including along hedgerows, the edge of woodlands, on uncut roadside verges and in gardens.

Single orange eggs are laid on a plants such as Cuckooflower, Garlic Mustard and other crucifers. Eggs and caterpillars are featured on the latest Orange-tip species page.