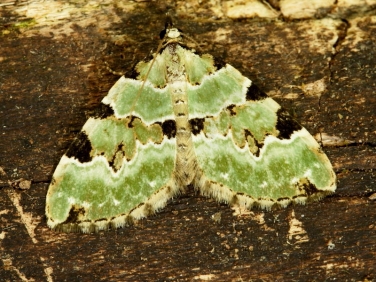 “When a species flies during the day” seems the obvious answer. However, although there are moths that fly and feed exclusively during the day, there are also many species that are easily disturbed during the day causing them to fly.

Yesterday, while walking up the garden path I disturbed a Green Carpet moth and it wasn’t until I considered doing a post on this sighting that I wondered if it would be correct to call it a day-flying moth. Other moths seen during the day

It’s certainly a species that is regularly seen flying in the daytime, albeit when it has been disturbed, but it is also attracted to light at night and seems most active at dusk. A new book on day-flying moths is in the process of being completed and it will be interesting to see what criterion is used in the species selection process.

Insight into Green Carpet (Colostygia pectinataria): it has a wingspan of approximately 14mm and is common throughout most of the UK inhabiting a wide range of habitats where the bedstraw larval plant is found.