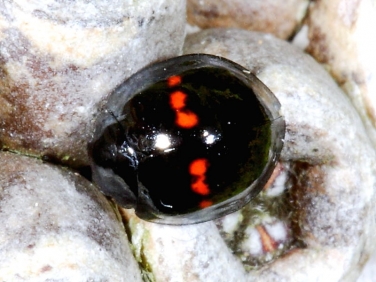 The Heather Ladybird has been common in our garden for the last few weeks and doesn’t seem to show any great preference for any particular shrub despite there being abundant heather. This image is taken on a Bottlebrush Tree.

Insight into Heather Ladybird (Chilocorus bipustulatus): can appear to be all black because of its small size. However, upon closer inspection it shows 2 to 6 red spots spread in a lone across its back.

It’s between 3-4mm in length and found locally in England and Wales but declining. It’s main host plant is heather and, although most commonly found on heathland, it is also associated with some deciduous trees and conifer scrub. It overwinters amongst leaf debris and in tree bark crevices.