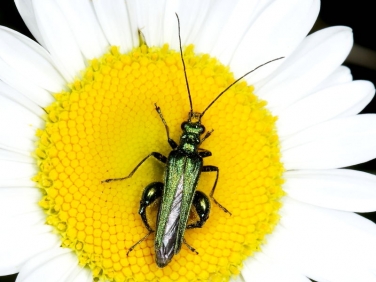 Insight into Thick-legged flower beetle (Oedemera nobilis): a common beetle that can be identified by its dazzling colour and gap in the elytra (wing case). This gap in the elytra is not always so obvious but generally gives the appearance of wings that don’t close properly over its back. The males are very distinctive having obvious green bulges in their legs. These beetles certainly catch the eye with their metallic green wing cases glistenening in the sunlight as they feed in the open on flower heads.

The Thick-legged Flower Beetle is approximately 9mm in length and found throughout most of the southern half of the UK between April and August. It is found in open habitat feeding on the pollen of a wide range of flowering plants.

A much larger, metallic green beetle is the Rose Chafer