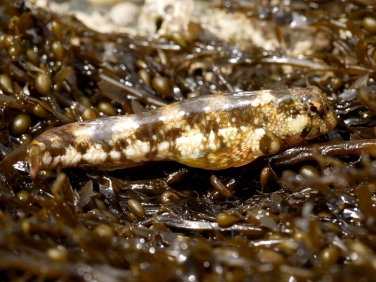 The most common fish seen in our local rock pools is the Common Blenny. Despite being common they can be very difficult to see unless they move. So often the only glimpse you get is of them dashing under a rock when they see your approaching silhouette.

We’ve taken to crouching low and creeping up to the edge of the rock pools and peering in. Such bizarre behaviour may attract some strange looks from paddling holiday makers but it works.

By staring for long enough, into what at first appears as a lifeless crystal clear pool, it’s amazing what creatures can be seen. This Common Blenny was lying on the sides on a rock pool and beauifully camouflaged against the gravel and seaweeds.

Insight into Common Blenny (latin name is Lipophys pholis): also known as the Shanny, it grows to about 16cmms and is found all around the coast of the UK.

It can change colour to match its surroundings and can survive out of water for long periods of time provided its skin remains damp. They can be distinguished from Rock Gobies, another common rock pool fish, by their single, continuous dorsal fin extending down their back.

They have sharp teeth used for feeding on crustaceans and if handled can bite.