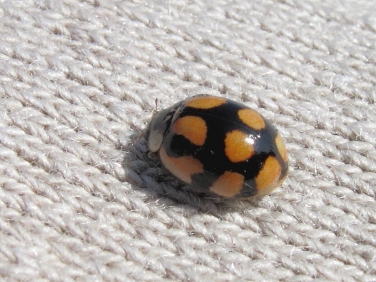 This ladybird settled high on my arm as I was standing in the National Trust car park at Lizard Point. This made photography even harder than usual especially as we were actually looking for a Hoopoe and the camera had the long lens fitted!

Why do you always have the wrong lens on the camera?

Well, actually that’s not the case if you have a camera like the Canon G10 which only has one lens and is capable of taking good record shots of even small insects like this 10-spot Ladybird f. decempustulatus that is under 5mm long.

Insight into 10-spot Ladybird (Adalia 10-punctata): it’s hard to see how this ladybird was given its name as it can have any number of spots (up to 15) and has variable colour forms (cream, yellow, orange, red, maroon, black, brown or light brown wing cases and orange, red, black, brown, maroon, yellow spots) and patterns (fused spots for example).

It’s widespread across Britain and has orange/brown legs but shouldn’t be confused with the Harlequin Ladybird which is bigger.