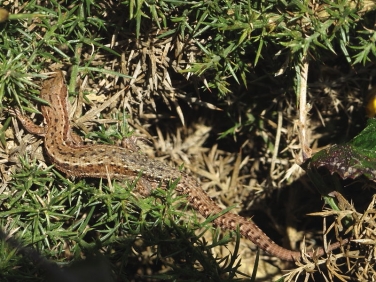 The Common Lizard, also known as the Viviparous Lizard, is the only lizard likely to be seen in Cornwall although there are attempts being made to introduce the Sand Lizard (Lacerta agilis) to the county.

This one was sunning itself in Gorse on Rosemullion Head at the weekend. We often come across them on stone walls where their lined and spotted brown skin blends in with the lichen covered stones making them difficult to spot unless they move.

Insight into Common Lizard (Zootoca vivipara): one of the only two lizards found in the UK it’s most common on southern heaths and moorland but may be found on wasteland and in gardens.

Adult sizes are variable but are normally between 10 -15 cms and its colour is usually a mix of brown shades with pale lines, stripes and speckling but shades of greens and subtle rusty reds are not uncommon.