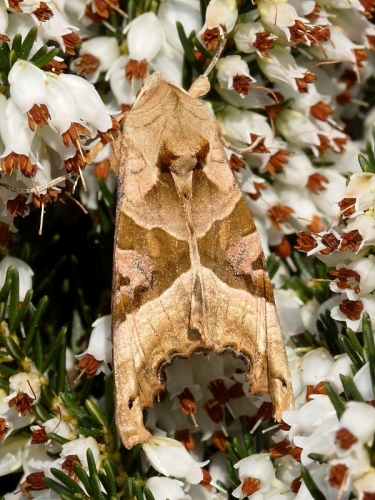 This Angle Shades moth spent a whole day sitting on a heather in the garden. It didn’t appear to be feeding and for a moth so cryptically well designed to blend into twig and leafy surroundings it seemed strange that it should select a heavily white flowered shrub on which to rest.

Possibly, it was a migrant that had flown in overnight and had immediately begun feeding on one of the few nectar producing early flowers in the garden and had simply remained rather than seeking a less obvious place to spend the day.

Insight into Angle Shades (Phlogophora meticulosa): a common species found in a wide range of habitats over most of the UK, this species has a wing span of about 23mm and is easily recognised by the shape of its wings.

Its main flight time is in the early and late summer months and resident numbers can be increased by the arrival of migrants from the continent.