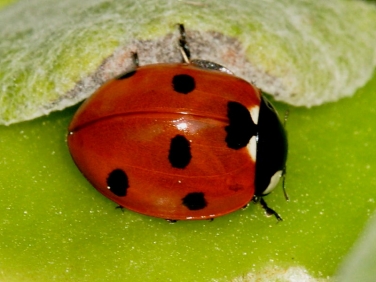 In recent days several 7-spot Ladybirds have appeared in the garden. This species is by far the most common ladybird we see both in the garden and in the surrounding Cornish countryside.

Insight into 7-spot Ladybird (Coccinella septempunctata): Although it can normally be identified by simply counting the spots on its elytra or wingcases it has been recorded with anything between 0 and 9 black spots!

There is also a Scarce 7-spot ladybird (Coccinella magnifica) but this is rare and restricted to habitat with plenty of wood ants.

There are several other species of ladybird that commonly have variable numbers of spots and consequently we seem to be forever checking our reference guides.