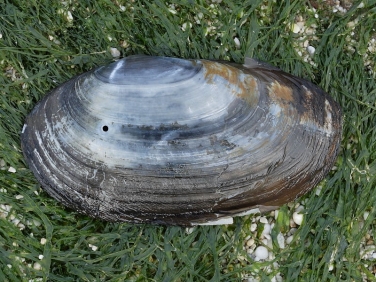 The shell of this freshwater Swan Mussel (Anodonta cygnea) was found surprisingly at low tide amongst the rockpools on Swanpool Beach, Falmouth on the seaward side of the Swanpool freshwater nature reserve.

A small whole drilled into it suggests it was eaten by a Dog Whelk (Nucella lapillus) which are plentiful on the rocks around the pools at low tide.

It seems the most likely explanation for the mussel being in the sea was that it was picked up from the freshwater pool by a bird and dropped into the sea where it was eaten by a Dog Whelk.