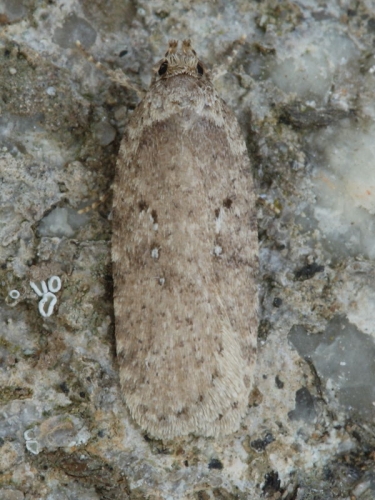 Agonopterix heracliana is one of the few micro moth species flying at the moment.

Several have been attracted to the lights of our lounge window over the last few nights. Not a species that’s going to improve the general public’s commonly held, mistaken perception of moths that they are small brown and boring! Still through a macro lens and using good lighting even a little insect such as this can show cryptic markings that blend beautifully with its surrroundings rendering it virtually invisible.

Insight into Agonopterix heracliana: it has a wingspan of approximately 21mm and is common throughout most of the UK.

It overwinters as an adult moth and may be attracted to lights at anytime between September and April. The species is very similar to Agonopterix ciliella. A look at the terminal banding on the hindwing is necessary to confirm identification.