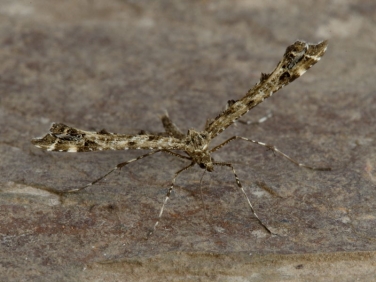 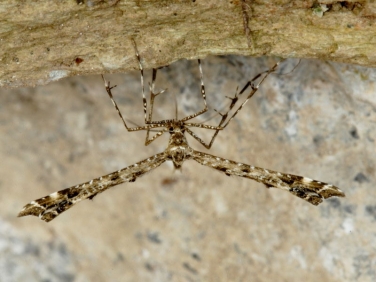 Finding any moth in the middle of winter would normally be a moment of celebration but when it’s a plume …! They are terribly frustrating things to photograph. All legs and sticky out angles making it almost impossible to get every part of them in focus within the narrow depth of field of a macro lens. If that wasn’t frustrating enough this Amblyptilia punctidactyla also had attitude. Not prepared to settle on a nice leaf it was constantly shifting up and down a stone wall before becoming overcome with shyness and tucking itself away underneath an overhang!

Insight into Amblyptilia punctidactyla: it’s very similiar to Amblyptilia acanthadactyla, another member of the Pterophoridae family of micro moths known as ‘plumes’, but can generally be identified by being greyer, lacking the rufousy browns in the forewing.

The moths have a wing span of about 20mm and hibernate over winter, sometimes emerging in milder spells. There are two generations and they can be recorded in most months of the year.