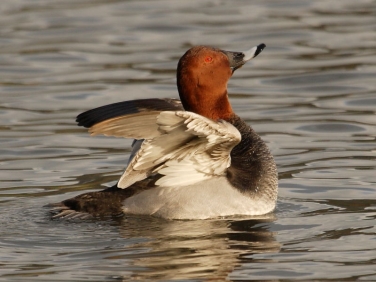 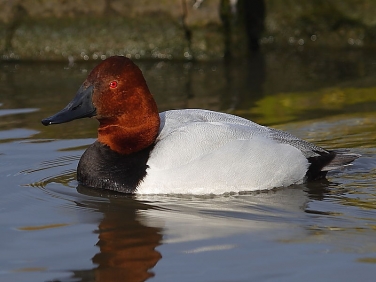 This solitary Pochard was photographed on Helston boating lake, Cornwall, feeding amongst the resident Mallard and Shoveler. Light was generally poor but for a few seconds the sun broke through the cloud making it possible to obtain a fast enough shutter speed to freeze the moving subject.

Insight into Pochard (Aythya ferina): a diving duck that visit most parts of the UK in the colder months to escape the severe Eastern European winters. Although most birds leave the country in the spring small numbers do remain to breed, mainly on large inland waters on the eastern side of the country.

Can easily be confused with the Canvasback (Aythya valisineria) (see photo above right), the largest North American diving duck, although they’re extremely rare in the wild in Britain.