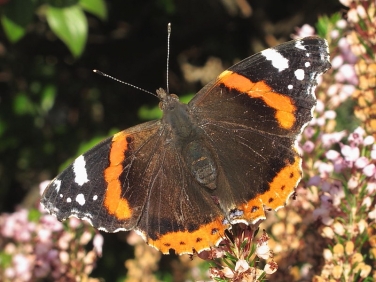 Red Admirals have been seen in good numbers in the south west of Cornwall in recent weeks and six were in the garden yesterday feeding on heather.

The weather has been very unsettled of late with wind directions fluctuating wildly with the Southerlies blowing up from the continent assisting the migration of butterflies as well as many rarer moth species.

Several Red Admirals have also been seen from boats in Falmouth Bay heading into southerly winds trying to reverse migrate back across the English Channel.

Latest information on The Red Admiral Butterfly (Vanessa atalanta) one of the UK’s most common butterflies which may be seen during any month of the year.

Main migration from continental Europe and North Africa occurs in late spring and may continue throughout the summer. The offspring of these butterflies will add to arriving migrants which can often be seen in late summer and early autumn sipping nectar from late flowering plants.

Although many butterflies will attempt to migrate south some will stay in the UK and try and overwinter and in recent years records of Red Admirals in January and February suggest some are being successful.