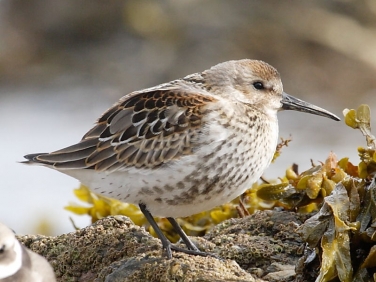 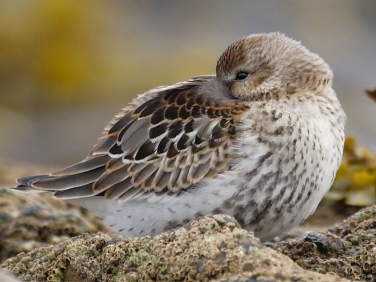 This juvenile/first winter Dunlin was resting amongst the Ringed Plover on the foreshore south of Gyllyngvase Beach in Falmouth, Cornwall.

Much of the time it kept its bill tucked under a wing as if asleep but a closer look showed an ever watchful eye was always focused on my somewhat ungainly but supposedly stealthy approach across slippery rocks.

Having probably arrived in the last few days from its hatching site hundreds of miles away to the north the grey first winter feathers can be seen beginning to break through its juvenile plumage.

Insight into Dunlin (Calidris alpina): the UK’s commonest small wader in winter, it’s found all around the coastline, particularly on muddy estuaries where they can form dense flocks of many thousands of birds.

Breeding birds nest in the highlands of England, Scotland and as far north as the Tundra. Migration south begins in August and birds ringed in England have been recorded as far south as the west coast of Africa.