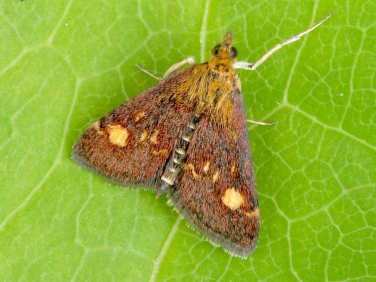 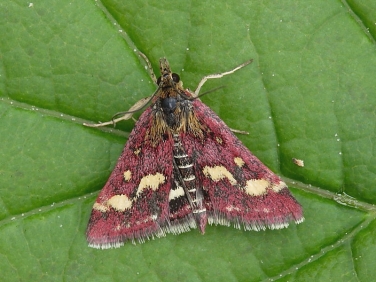 Before the weather changed for the worse this colourful micro moth, Pyrausta aurata, (above left) was recorded flying in the sunshine visiting flowers in our Falmouth garden. To be sure that it wasn’t the very similar and often more common Pyrausta purpuralis (above right) the underside of the hindwing was checked for the unmarked basal section diagnostic of P. aurata. Other day time flying moths

Insight into Pyrausta aurata: it has a wing span of about 16mm and is a member of the Pyralid family of micro moths which deceptively includes species considerably larger than some of the species termed as ‘macro moths’.

P. aurata flies both during the day and at night when it can be attracted to light. Generally P. purpuralis has more extensive and more boldly coloured wing markings but in both species the patterns can vary in their extent and brightness.