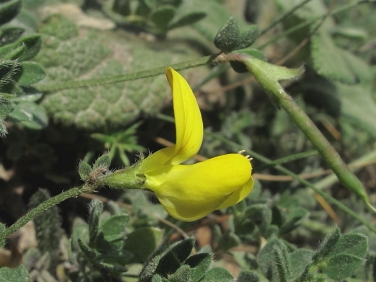 A small number of Slender Bird’s-foot-trefoil plants were flowering at the base of a large rock alongside the high tide path from the National Trust car park to Kynance Cove at the end of July.

Insight into Slender Bird’s-foot-trefoil (Lotus angustissimus): native and described as ‘very local’ in south and south west England, it is very similar to Hairy Bird’s-foot-trefoil (Lotus subbiflorus) but it flowers in heads of only 1-2 flowers (rather than 3-4) and the keel, the lower edge of the lower petal, has a right-angled bend (rather than an obtuse angled bend).

It flowers in July and August.

UPDATE: after a helpful comment from Doctor French and Ian Bennallick (see below) it seems likely that this specimen is actually not Slender Bird’s-foor-trefoil but a variety of Common Bird’s-foot-trefoil (Lotus corniculatus), possibly var. carnosus or var. crassifolius. A site visit next summer for confirmation is called for!