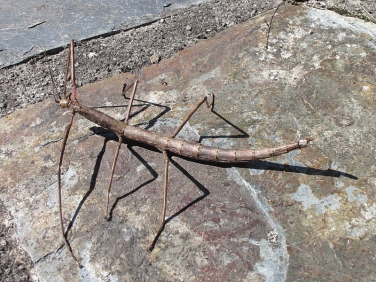 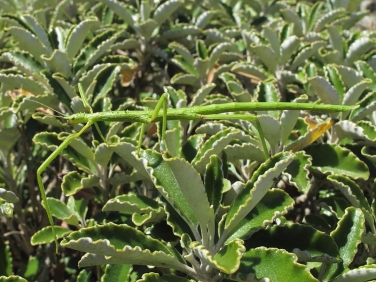 Both a green and brown form of the Unarmed Stick-insect were found in our Cornish garden a couple of days ago. Having just moved into our house in Falmouth we had hoped we would have these insects in our garden as they have been established in Falmouth for many years.

Unfortunately, the brown specimen was being attacked by wasps when we found it and parts of its abdomen appeared to have been eaten away. However, it’s good news that some of the eggs laid by last year’s adults have successfully survived one of the harshest winters Falmouth has known for many years and so we look forward to living in the company of these fascinating creatures.

Insight into Unarmed Stick-insect (Acanthoxyla inermis): Britain’s longest insect with a length of up to 125 mm is naturalised in the UK but is a native of New Zealand.

Thought to have been introduced into this country on imported plants, they have managed to survive in the mild climate of south west Cornwall and establish colonies.

The species do not require males to breed and all the insects found in this country are female which produce fertile eggs.

Visit In Cornwall – a separate website showcasing what Cornwall has to offer its residents and visitors including beaches, towns, gardens, leisure activities and holiday accommodation.
Previous Post
Next Post