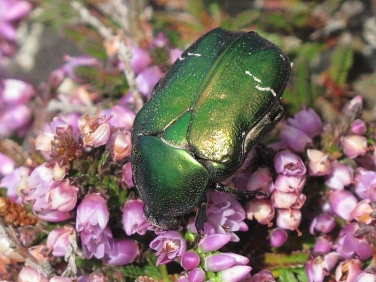 This large British beetle is called a Rose Chafer. It was sitting in the Heather or Ling (Calluna vulgaris) on the slopes above Kynance Cove in bright sunshine making it look very green and metallic.

Insight into Rose Chafer (Cetonia aurata): found in the southern half of the UK, they feed on flowers from early summer.

The triangular shaped scutellum between the wing cases helps identify this species. The Noble Chafer (Gnorimus nobilis) is similar but the scutellum is an equilateral triangle and not an isosceles as in the Rose Chafer.

Another much slimmer, green metallic beetle is Oedemera nobilis