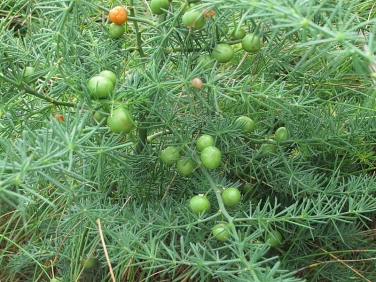 Sometimes you know where you need to go to get a chance of finding something a bit special. We were at Kynance Cove on The Lizard in Cornwall at a stage of the tide where you could walk across the sand to Asparagus Island and so had to go and look for the Asparagus subspecies prostratus or Wild Asparagus.

We found a number of plants on the grassy banks although we appeared to be too late for the flowers as we only found fruit.

Insight into Wild Asparagus (Asparagus officinalis ssp. prostratus): native but only very local in south west England, it is endangered and found on rocky sea cliffs and sand-dunes.

It grows lying along the ground with stems reaching 30cm.

It is suggested it may be a separate species to Garden Asparagus (Asparagus officinalis spp. officinalis) rather than a subspecies.