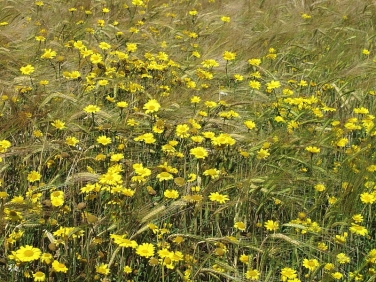 These beautiful golden yellow flowers were thick around the edges of a wheat field near Land’s End in Cornwall. A stunning sight on a sunny day.

Insight into Corn Marigold (Glebionis segetum): formerly known as Chrysanthemum segetum it is native to the eastern Mediterranean region and spread with the introduction of agriculture.

It is declining in the British Isles but is an arable weed of sandy soils. It flowers from June to August.