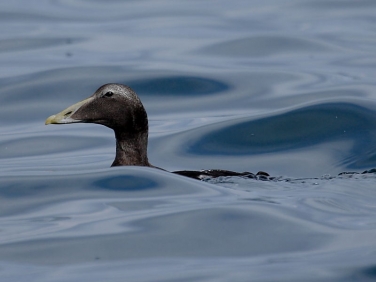 This male Eider duck was in the middlle of Carrick Roads, the deep water channel of the Fal Estuary.

Small flocks are sometimes seen in the estuary in the winter (see our Eider in Falmouth Harbour post in March) but are usually quite flighty when approached by a boat. This was a solitary male in eclipse plumage which, having already shed its main flight feathers, made no attempt to fly.

Insight into Eider (Somateria mollissima): a true seaduck, rarely found away from the coast.