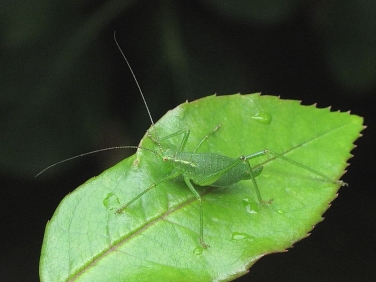 This female Speckled Bush-cricket was found during a search for a Stick Insect in a friend’s garden in Falmouth, Cornwall. The cricket’s oviposter is not yet fully developed showing she has still not reached maturity.

Our search had been inspired by a photo sent to us of a Stick Insect seen in the garden. Frustratingly we weren’t able to confirm the identity from the image but there seemed a possibility that it may have been one of the rarer species, so despite the initial search failing to find it, we will definitely be back!

Insight into Speckled Bush-cricket (Leptophyes punctatissima): a common cricket found throughout the southern half of the UK, it’s becoming progressively scarcer further north.

Lengths may range between 10 and 20mm with the males being smaller than the females. Males have tiny brown wings sitting on top or their back while the female’s wings are further reduced to insignificant flaps.

The insect feeds on a variety of shrubs and can be found in a range of different habitats including gardens, hedgerows and rough vegetation.