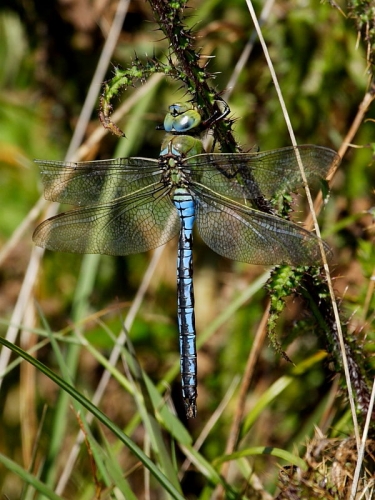 This male was photographed at Windmill Farm Nature Reserve on The Lizard in Cornwall. It spent most of the time patrolling the pool, its leisurely flight frequently interrupted by intermittent hovering and sudden bursts of speed in the direction of other dragonfly or to snatch small insects out of the air.

In the bright sunshine it rarely stopped but, fortunately, did once, sufficiently long enough to get a record shot.

Insight into Emperor Dragonfly (Anax imperator): one of the largest dragonflies likely to be seen in the UK, it is commonly found in the southern half of the UK around well vegetated, still and slow moving waters and it quickly colonises new waters.

The larvae live underwater for up to two years before emerging in early summer.

The emergent adults have a long flight period extending from early June into September and are capable of taking large insects such as Four-spotted Chaser (Libellula quadrimaculata).