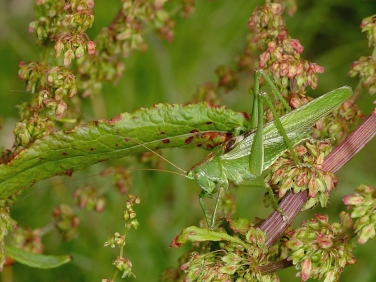 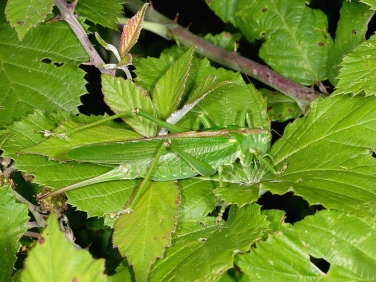 This male Great Green Bush Cricket (above left) was photographed at Prussia Cove, near Praa Sands on the south coast of Cornwall. Our first sighting of this species of cricket this year, it’s a reminder of how big they are compared to any other of our native crickets. Despite their size its surprising how difficult it is to find them and often it is only their movement that gives them away. Homing in on their high pitched song, which starts up during the day and continues into the night, is the best way of locating them.

Insight into Great Green Bush Cricket (Tettigonia viridissima): 40 – 55mm long, with the males being smaller than the females, it is the largest cricket to be found in the UK. The female can be determined by her long ovipositor (see photo above right) which they use to lay eggs in the ground.

They are fairly common in the south of the UK particularly along the south coast and the adults can be seen between July and November.