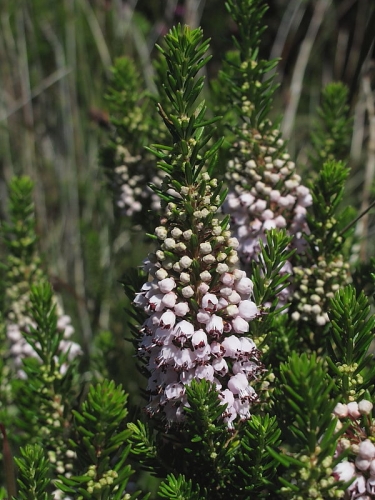 These pink flowers on bright green foliage are abundant on the heaths above Kynance Cove on The Lizard peninsula at the moment. Three other members of the heath family were flowering alongside the Cornish Heath. They were Bell Heather (Erica cinerea), Cross-leaved Heath (Erica tetralix) and Heather or Ling (Calluna vulgaris).

Insight into Cornish Heath (Erica vagans): it is native but whilst it may be locally abundant on The Lizard, it is not found anywhere else in Great Britain and at only one site in County Fermanagh in Northern Ireland where it is specially protected by law.

It favours alkaline soils found on the serpentine rocks of The Lizard and it was voted the County flower of Cornwall in 2002.