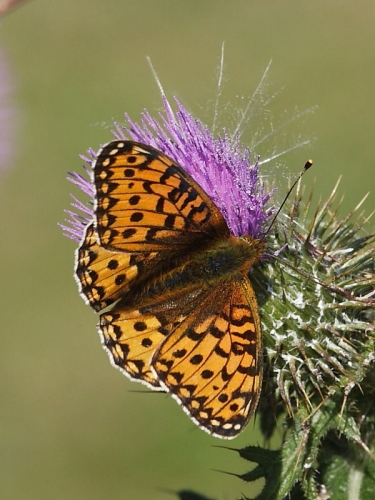 Lots of these fritillaries were flying in the bright sunshine yesterday at Penhale on the North Cornish coast. As seems often the case they were continually on the move, only fleetingly settling but not long enough to stand any chance of a photograph. It wasn’t until late into the afternoon, while nearly back at the car, did we come across this one nectaring at a Spear Thistle (Cirsium vulgare).

We’ve found in the past with Dark Green Fritillary that after a day on the wing they do tend to settle on flowers and provide an opportunity to be photographed late in the day.

Insight into Dark Green Fritillary (Argynnis aglaja): distributed throughout much of the UK, it is more common in the west and south west and mainly found on open flowery downland, dunes, moorland and coastal cliffs.

It has a single brood with a long flight period from June to September.It particularly likes damp areas and has a strong attraction to purple flowers, such as thistles and knapweeds, and lays its eggs on violets.