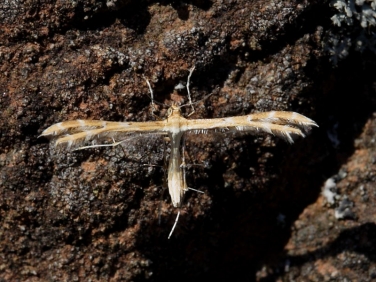 This plume moth was photographed yesterday on a cliff ledge at Kynance Cove on The Lizard in Cornwall.

There seems a strong possibility that it may have been the rare migant Oxyptilus laetus. However, because of its similarities with other species, we may never know as the specimen was not retained for detailed examination.

Interestingly, should it have been Oxyptilus distans, the main confusion species, then this moth too would have also been a notable Cornish record, having a range restricted to the far east of England. Anyway, we are awaiting comments from experts knowledgable on this family of moths.