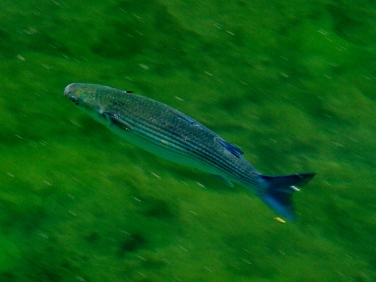 As the water warms, shoals of Mullet are showing in increasing numbers in the estuaries and harbours around the Cornish coast. This fish was one of severel seen feeding on algae in shallow water in Falmouth harbour yesterday.

Insight into Thick-lipped Mullet (Chelon labrosus): common around most of the UK coastline in the summer months, it is a shoaling fish that feeds mostly on algae and small invertibrates but will also scavenge fish discards and frequents sewage outlets.

It is not highly prized commercially but is considered by anglers as an extremely hard-fighting fish and one that often requires a lot of finesse to catch.