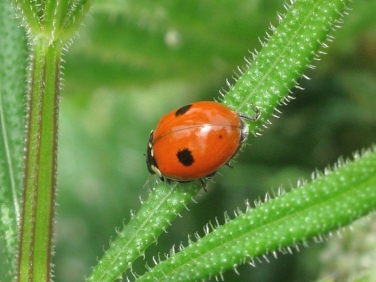 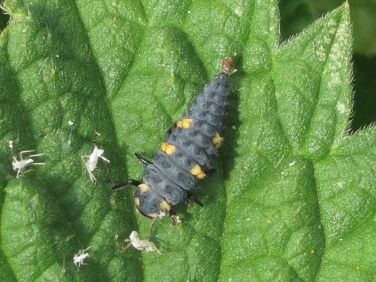 While watching birds at Marazion Marshes, near Penzance in Cornwall, a couple of adult 2-spot Ladybird and many 7-spot Ladybird larvae were noted on Common Nettle and Bramble. Although both these species are considered to be the most common ladybirds to be found in the UK we have seen very few 2-spot in Cornwall so far this year.

Insight: Of the 46 ladybird species in the UK, the 7-spot Ladybird (Coccinella septempunctata) and 2-spot Ladybird (Adalia 2-punctata) are the most common. In recent years there has been a general decline in ladybird numbers and one of the reasons for the fall in the population is thought to be the rapid spread of the much bigger Harlequin Ladybird (Harmonia axyridis) since it arrived in the UK in 2004.

Most species of ladybird and their larvae feed on aphids and other insects and are recognised as a good form of pest control by gardeners.

The larvae have 4 instars and can be recognised as being beetle larvae by their three pairs of legs – see Illustrated Guide to British Caterpillars.