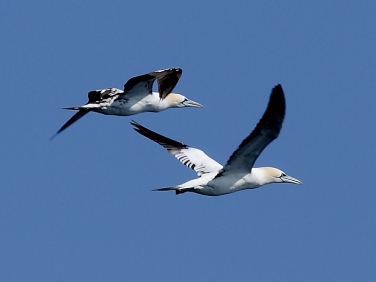 Gannets, also known as Northern Gannets, have been feeding close in to the south west Cornish coast in recent weeks and these two were photographed yesterday in Falmouth Bay. The leading bird is an adult and the bird behind is in its third year having not yet aquired its full white wing plumage.

They really are a fantastic bird to watch as they plummet like javelins into shoals of Mackerel and Sandeel.

Insight into Gannet (Morus bassanus): a common seabird found around the whole of the UK, the largest colonies breed on exposed islands and cliff faces of the Northern Isles, Scotland and Grassholm Island off the Welsh coast. The furthest southerly breeding colony is off the Channel Island of Alderney.

They leave their breeding sites in late August and become pelagic covering huge distances, some reaching as far as west Africa.

In recent years many seabird colonies have seen a dramatic decline in population due to reduced fish stocks. However, Gannet numbers seem to be holding up. A study of the deep water fish they have been bringing to their nests suggests they have been able to sustain numbers by flying great distances to feed on discards thrown from trawlers.