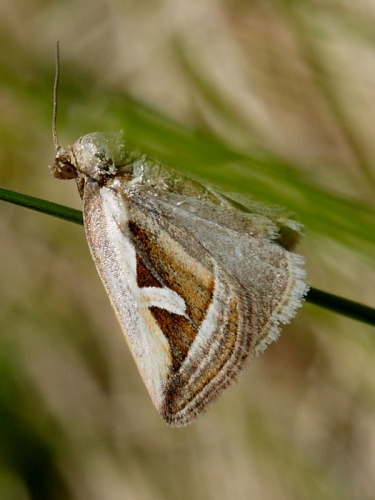 Several Silver Hook were disturbed from sedges during a walk through marshy areas of Penhale Sands, on the north Cornwall coast. It’s a species easily put up during the day and it doesn’t fly far before landing again on a plant stem.

However, photographing them is not an entirely straight forward exercise. They have the annoying habit of settling low down on a stem at such an angle that requires you to get down on your hands and knees to have any chance of framing a good shot.

Insight into Silver Hook (Deltote uncula): they have a localised distribution in the UK being restricted to marshy and wet areas where the caterpillars feed on sedges and grasses.

Its scientific name Deltote is derived from the Greek Deltotos, shaped like the Greek capital delta which refers to the triangular shaped forewing, and uncula meaning little hook after the silver reniform on the forewing. The English name also relates to this silver mark on its forewing.