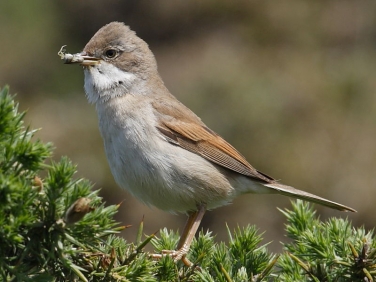 It’s that time of year when some birds are preoccupied feeding their young and become less wary. This female was so busy feeding a brood in a thicket of Bramble (Rubus fruticosus agg.) and Gorse (Ulex europaeus) next to a path at Penhale Dunes on the north Cornish coast that I was able to get sufficiently close to be able to grab a decent photograph using only a 400mm lens.

Early in the season, when Whitethroat had just arrived from their wintering quarters in Africa, it was very difficult to get near enough to take any clear shots with an uncluttered background.

Insight into Common Whitethroat (Sylvia communis): a common migrant warbler found from April to September throughout most of the UK, it breeds in most scrubby habitats and feeds on a range of insects and berries.

It migrates south in the late summer and winters in Africa, south of the Sahara. The rusty brown edges to its tertial and covert wing feathers help identify it from other similar warblers apart from some of the much rarer species.