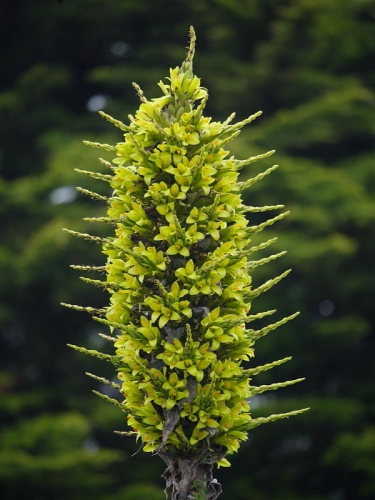 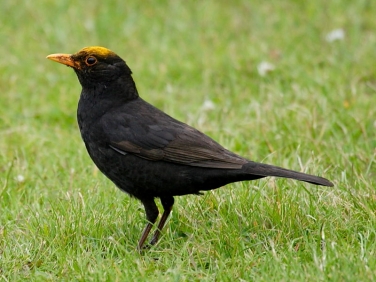 Okay, its just a common Blackbird (Turdus merula) but when you first catch a glimpse of a bird like this in flight, at a time of high migration activity and in the far south west of Cornwall, your heart does momentarily jump a beat!

This Blackbird was seen in Queen Mary Gardens in Falmouth. The cause of its yellow crown was soon revealed when it began feeding on Puya chilensis, a tall, exotic plant with yellow flowers into which it was fully immersing its head – the pollen from the flower coating the top of its head.

Insight: rare migrant birds appear annually in Cornwall during the spring when birds that have been wintering further south in Europe, Africa and America may overshoot or be blown off their normal summer migration route.

An autumn passage of birds also takes place with birds moving south and this is often the best time to see American birds blown off course, across the Atlantic Ocean, to the shores of Cornwall.

Insight into Puya chilensis: a plant with green-yellow flowers on spikes up to 2m tall originally from the Andes in Chile where it is pollinated by hummingbirds. It can tolerate frost and even short periods down to -5C.