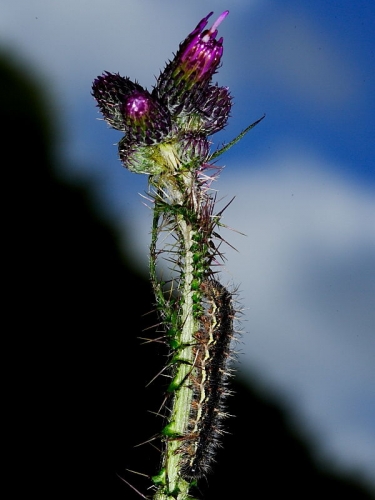 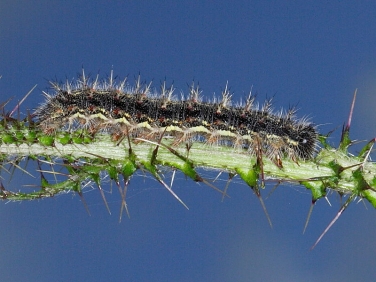 These are considered British caterpillars despite the adult butterfly being a migrant that cannot survive UK winters.

The small numbers of Painted Lady butterflies seen earlier this year will have laid eggs and the hatched caterpillars should now be large enough to make searching for them easier. So its worth checking out all species of thistles over the coming weeks, in particular Spear Thistle (Cirsium vulgare) which seem a favoured food plant.

These are photographs of a Painted Lady caterpillar found during the irruption year in 2009 when millions of migrant butterflies entered the country.

Insight into Painted Lady (Vanessa cardui): a migrant butterfly from southern Europe and North Africa, it visits the UK in variable numbers annually. First migrants normally arrive in the spring followed by the main influx in late summer.

Despite being able to breed here successfully the butterflies are not able to survive UK winters and many try to migrate south back across the channel. The last two irruption years, when millions came into the UK reaching as far north as the Scottish Islands, were in 2009 and 1996.