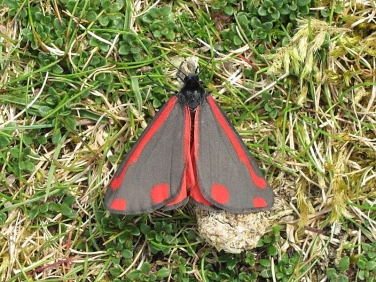 It’s a day flying The Cinnabar moth. Although normally a nocturnal flyer, The Cinnabar moths are often disturbed during the day when they will flutter weakly a short distance before settling again in the grass.

This one was disturbed from long grass when walking across the Penhale Dune system on the North Cornish coast.

Updated information on the Cinnabar moth which is common in most of the UK, they favour well drained, rabbit-grazed, open ground where their main larval food plant Common Ragwort (Senecio jacobaea) is plentiful.

The moths emerge over an extended period between May and August. Their boldly yellow and black striped caterpillars may be seen at the same time as the adult moth.

The only confusion species are the day flying Burnet moths which have much narrower wings and long antennae.