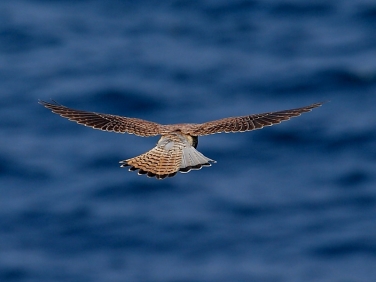 This female Kestrel was seen hovering over the cliffs along side the South West Coast Path near Falmouth and showed some recently replaced paler tail feathers.

Insight into Kestrel (Falco tinnunculus): one of the most common birds of prey to be found throughout the UK, it almost exclusively hunts by hovering over its prey before diving on to it.

It is critical for the survival of all birds to be able to moult and replace damaged feathers and this is particularly important to birds of prey such as the Kestrel that depend on their flight agility to catch prey.

During a normal moult raptors change their feathers in a co-ordinated sequence and so maintain their flight ability at all times.