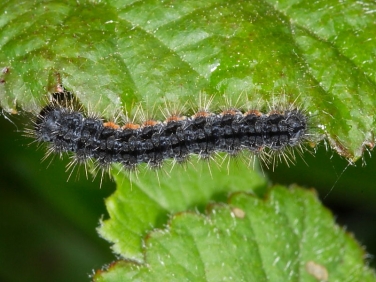 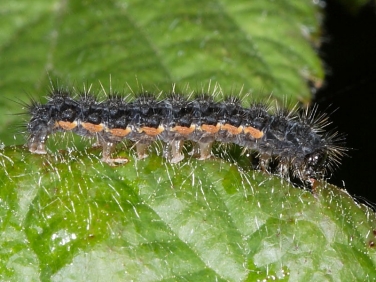 The Common Footman caterpillar is, thankfully, one of the easier species of British caterpillars to identify. There are over 2,500 British moths species and some larvae have to be reared through to the adult moth stage to be sure of their identity.

This Common Footman caterpillar may have been found on Blackthorn (Prunus spinosa) but its caterpillars actually feed on lichens – so it was probably just soaking up the fabulous weather we’ve been having in Cornwall this spring.

The normal flight time for the adult moth is between July and the beginning of September but here in the south west they may emerge several weeks earlier.

Insight into Common Footman (Eilema lurideola): a member of the Arctiidae family of moths, it is found commonly throughout most of the UK. Like other species of Footman the larvae feed on lichens.

There are several similar moths in this family all with a similar wing span of between 28 and 35mm but the shape of their wings at rest are a useful guide as to their identification. Click the link to see photographs of the Arctiidae » Lithosiinae family of moths.