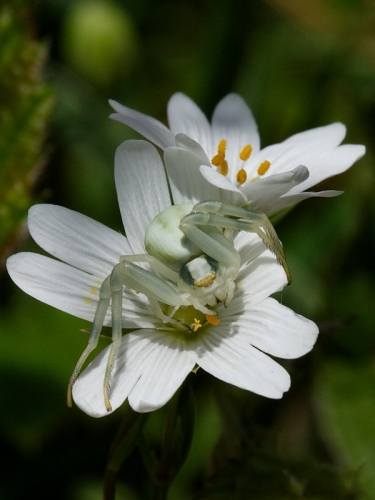 All these colours could describe the Flower Crab Spider (Misumena vatia). This species of spider is a stealth predator that will sit motionless in a flower head and wait for an unsuspecting insect to arrive and start taking nectar. It’s a master of camourflage, changing colour to blend in with the flower’s petals. They will grab most insects including flies, hoverflies, bees and even butterflies and moths (see images below).

They also happen to be very photogenic and, being reluctant to give up a kill, will often pose for the camera, nestled in a flower head. This one, on Greater Stitchwort (Stellaria holostea), was photographed at the weekend beside the South West Coast Path at Mawnan Glebe near Falmouth in Cornwall. Other images shown below have been taken at various locations in the south west and illustrate the variety of prey the crab spider will eat.

Insight: The crab spiders are a family of spiders found world wide that get their name from their two pairs of front legs that angle outwards and are used to snatch prey. They don’t spin a web but instead hunt by ambush.

Widespread in the south of the UK, they are increasingly reported in gardens which may be due to a number of factors such as improved recording, a change in the cultivated flower varieties or possibly climate change. 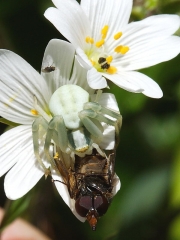 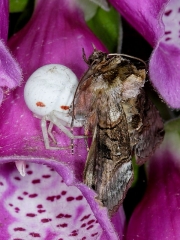