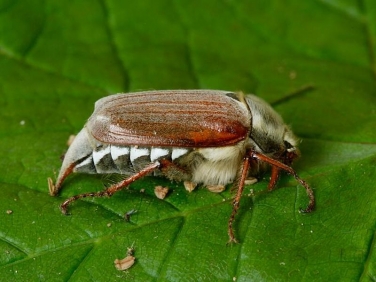 Cockchafer, or May Bugs as they are often known, are on the wing at the moment. They really can make a lot of noise as they buzz through the air at night. It always seems to me that the accuracy of their sat nav is questionable as they forever seem to be flying into things with quite a thud. Anyone who sets a mercury vapour lamp trap to attract moths will have come across these beetles when inspecting the catch in the morning.

Insight into Cockchafer or May Bug (Melolontha melolontha): At up to 30mm in length, it is one of the largest flying beetles in the UK. It flies at night during late April and May feeding on the leaves of a variety of trees and shrubs.

The white grubs feed on the roots of plants including agricultural crops and in the past, before the use of pesticides, was considered a major pest by farmers.

Although it appears quite threatening at close quarters and has been known to fly into people it is considered harmless.