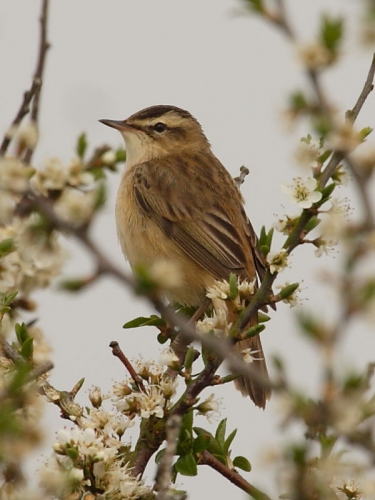 It’s a frequent question asked at this time of year when spring migration is in full flow and small warblers seem to be everywhere. Fortunately some of the most difficult warblers to identify have very distinctive songs such as the Chiffchaff (Phylloscopus collybita) and Willow Warbler (Phylloscopus trochilus).

This Sedge Warbler (Acrocephalus schoenobaenus) not only has a distinctive chattery rhythmless song but it has a prominant creamy white stripe above the eye. It also has a long latin name!

Like many warblers they can be frustrating birds to photograph, often heard at close range chattering away in the reed beds but rarely showing out in the open for long enough to get a clear shot.

Insight into Sedge Warbler (Acrocephalus schoenobaenus): a little warbler that winters in Africa and arrives in the UK in the spring to breed. One of the marvels of bird migration, this tiny bird weighing as little as 12g flies thousands of miles, only pausing briefly during its epic journey.

It can be found throughout the UK and favours wetlands with reed beds and sallows. Inhabiting similar habitat to the Reed Warbler (Acrocephalus scirpaceus), its presence can be determined by its rhythmless song, which at times it seems to haphazardly make up, compared to that of the Reed Warblers more co-ordinated and well composed rendition.