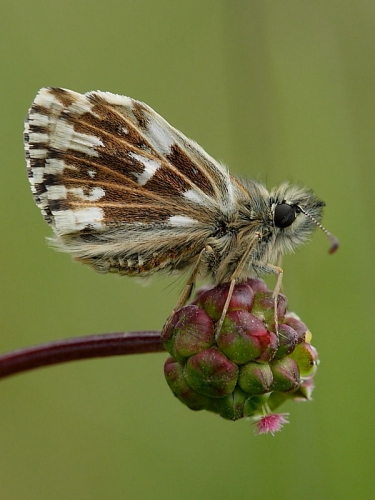 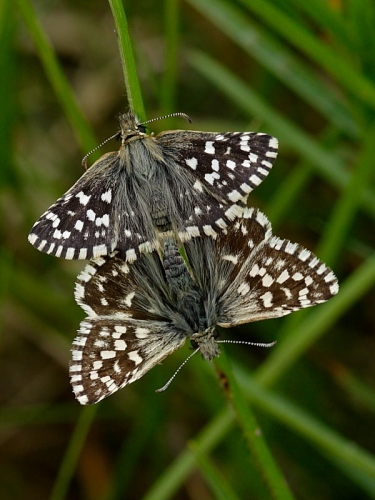 Despite the first real rain we’ve seen for weeks here in Cornwall we found 8 Grizzled Skipper during a quick visit to Penhale Dunes on the north coast. One was of the form taras (below right), an aberration having the white dots on its forewing merged together to give the impression of a much whiter butterfly. Keeping track of these tiny butterflies in flight is difficult but the overcast skies meant they did spend more time than normal settled in vegetation trying to absorb what little heat there was from the sun. 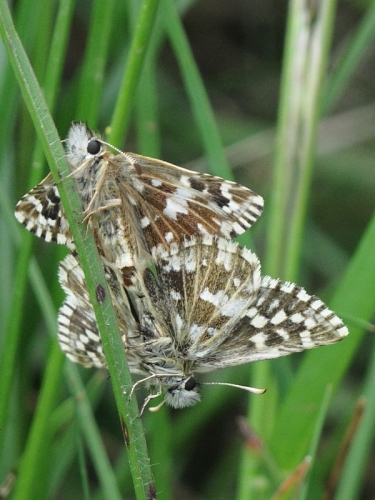 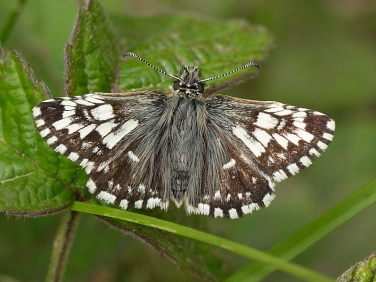 Insight into Grizzled Skipper (Pyrgus malvae): a tiny butterfly with a wingspan of about 25mm, it is distributed locally throughout the southern half of the UK with a few isolated pockets further north. In Cornwall there are only two sizeable populations, with the Penhale sand dunes population containing unusually high numbers of the form taras.

It may fly as early as late March until mid June in the far south with, occasionally, a partial second generation in August if weather conditions are favourable.

In recent years its numbers have declined significantly due to changing land management . The species requires a low to medium height sward created by rotational grazing and is found in a diverse range of habitats such as woodland glades, heaths, dunes and chalk downland where these land management practices still take place. It would appear to have a particular liking for sunny undulating unimproved pasture containing a range of larval foods that include Wild Strawberry (Fragaria vesca) and the adults primary nectare source Common Bird’s-foot-trefoil (Lotus corniculatus).