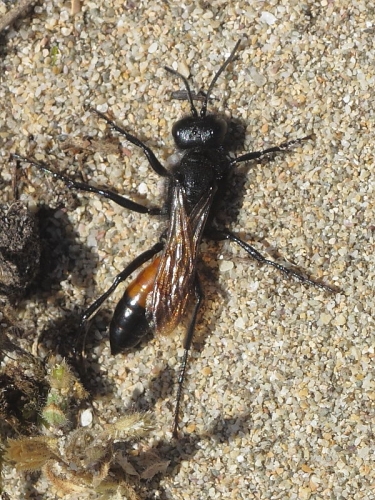 This digger wasp, thought to be Podalonia hirsuta, was seen and videoed dragging a caterpillar across the slope of a sand dune at Penhale Dunes in North Cornwall.

We have witnessed this huge feat of strength on behalf of a digger wasp on several occasions before but for once were able to record it – see “Caterpillar Hunting Wasp” video below.

Insight into Digger Wasps: This group of wasps get their name because most species nest in the ground. The females excavate their own burrow and fill it with prey such as caterpillars.

When they find their victim they inject it with a paralysing spray before carrying it to their burrow. It is thought the prey is merely paralised, not dead, and so does not decompose, providing a food source for the larvae that later hatch from the wasp’s eggs laid in the nest.

Some of this species of wasp are very difficult to identify in the field. Podalonia hirsuta, found in coastal regions predominately in the South West and west of the UK, can often be identified by the much shorter waist.